Alan Grant extended an invitation to NE members from east of the river to come do a 60 mile Barkhamsted Reservoir ride. With the exception of Michael and Carolyn, I think we have all ridden together at some point but never on a long road ride. The weather was perfect and we started from Granby and headed north and west with a pretty good climb after just a few miles. 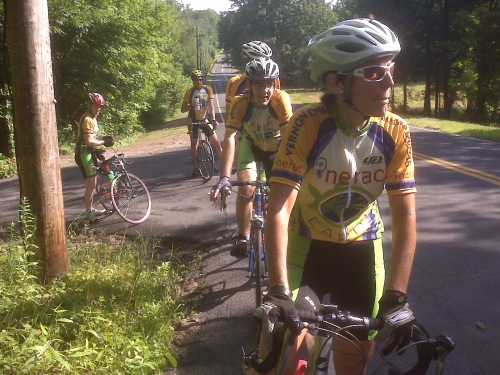 We learned early on in the ride that “rollers” or what we east of the river riders think of as-fly down one hill and peddle hard to fly over the next, is a totally different meaning out there. The hills are scaled a bit larger than ours in that we ride hills that are short and steep, they ride hills that go on for miles. When Alan says “we just have a few rollers and we’ll be to the reservoir” what he means is that you climb for 10 or 15 minutes to get over a hill, then you “roll” down the other side! All kidding aside the hills were fun (isn’t that why we ride) and I now know why their group is so strong. We stopped at the Barkhamsted dam for photo ops

and then headed over to the Farmington River valley. The ride was beautiful and we cruised alongside the many fly fishermen working the river on a perfect Sunday morning. We stopped in Riverton to stock up on water and snacks at the general store. From there we headed towards an out and back which was a steady uphill grade along a brook which ended with a steep uphill. While waiting at the top Dave discovered he was missing 3 rollers from his chain which is why it was giving him trouble shifting. We discussed fixing it but settled on riding out. When we headed back down the out and back road, we did so in a 12 person pace line that was flying very fast. Andrew, who is a new member of the club, has only been road riding for a short time but you would never know it. He is super strong on climbs and can sprint faster than Mike Sousa! (Mike?) I was on his wheel in the pace line where he took a turn at the front and kept a fast pace. We took a turn and started a climb up a hill that resembled a short Plains road that many of you know as Girl Scout hill. The road led us to the Colebrook Dam where we took some more pics and enjoyed the view down a huge gorge. 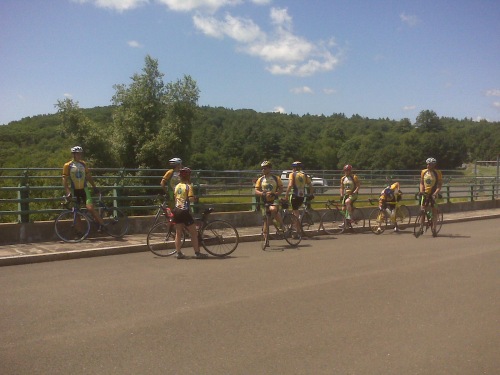 Michael told us about ice climbing there, and Steve pointed to the ridges where they snowshoe in the winter. Tom said that they kayak here and that on some days are the only ones on the water. If you are an outdoor enthusiast, this is the part of the state to live in. Once we left the dam the climbing really started. On leaving the dam we had a long climb (and please forgive me but at this point all the climbs started to run together, and I had no idea where I was or when we would get to the promised long sweet new pavement downhill that would lead us to the cars) that led us to Rt 20. Once on 20, I knew where we were and that a nice downhill was coming up which bottoms out at the north end of the Barkhamsted Res. I also knew from riding a motorcycle out there, that there was a long steady climb back to the center of East Hartland. My legs by now were starting to complain and I decided to settle in to whatever speed Susan was turning and get my butt up the hill. I had been using Susan to pace me up the hills but on this hill she rode away like I was standing still. John and Steve spent the day at the front as John does, and they seemed to fly up the big hill. Dave was getting stronger as the ride went on and went quickly up as well. I made it to the top to find a lonely straight road with no one else for miles around. At the center of East Hartland I found the others resting in the shade so I joined them and sprawled out on the grass to recover. That turned out to be a bad decision on my part. When Michael and Carolyn arrived I got on my bike but my legs felt like lead. Once we got rolling again and got the stiffness out, it was down Rt. 20, the promised new pavement downhill section that we ripped all the way back to the cars. We had a great lunch at the Cambridge House Brew Pub which I highly recommend. I enjoyed this ride and want to thank Alan and the others for their west of the river hospitality.

The scenery and country side are hard to beat. I can’t wait to ride those “rollers” again. Alan sent his Garmin data which shows 5,245 of climbing which I believe. — Dave F.