Well, my husband came home from Iraq last week (Yay!!!!) and I haven’t been able on the bike much so on Monday I was chomping at the bit to ride. It seems like this is a big vacation week so it ended up being just me and John, I think he knew that I was looking for a challenge because he threw out Williams Way as a ride possibility and I readily agreed. I haven’t ridden the Williams Way route in quite some time, so long that I could barely remember the route. So we climbed, and we climbed, and then we climbed even more. I don’t think I’ve ever put so much effort into a lunch ride. Usually I’m recovering from a hard mountain bike ride or Tuesday night road ride, or I’m saving my legs for a big ride coming up so I rarely dig too deep for the lunch rides. But Monday, oh boy I dug deep. And strangely I did not feel the pain until about 14 miles in on the hill up to Goose Lane (reverse broadway), and then I thought I was going to have to get off my bike and lay down while my head exploded. Somehow I suffered up the rest of the hill then got a 2nd wind after climbing Cassidy and hopped on John’s wheel for a fast stretch that brought us almost all the way to Kevin’s road before I dropped off. I tried to finish the last hill up to 195 strongly and pulled into Nerac with about a 17mph average and 177avg heart rate, that’s a pretty insane mph for me on such a hilly route. As I left for class an hour later my face was tomato red and I was still sweating despite having showered!!! I had 2 back to back two hour and 45 minute classes and I thought for sure I was going to fall dead asleep but had the exact opposite effect and the adrenaline rush lasted through both classes. The problem I didn’t anticipate was being hungry enough to start gnawing on my books despite snarfing down my dinner on the way to school! Thanks John for picking a great route, the encouragement (without heckling!), and letting me draft on the last stretch. Definitely a top 10 lunch ride, probably closer to a top 3. – Jill

On Saturday August 28th I accepted another one of my wife’s
challenges ( maybe she just wants to punish me ) and rode to Kittery
despite my lack of road riding this year. My yearly total was 1500
with the longest ride being the Nerac 60 miler on July 18th. I
usually have goals when I do this ride.. this time surviving was the
sole goal. A temperature of 51 degrees at 6am made for cold hands
and toes. I hate the cold. In Stafford a train, the longest one I
have seen in Connecticut, was crossing 32. Since I wasn’t in a hurry
it didn’t matter. Miles later I waited for the same train, then miles
later I waited again for the same train. It was a slow moving train.
The fourth & last time I saw that train it went beneath the road in
Palmer Ma. I don’t know if it was the cold or the train or what, but
at 3.5 hours into the ride I realized that I had just finished my
first 24oz water bottle. Oopps! Most of my calories are mixed with
my water so I’m now behind on water & calories. Some of roads are as
rough as a mtb course while plenty of miles are very nice. Mile 92 is
the NH boarder and new tar that is as smooth as can be greets me.
Using my imaginary aero bars minimal effort will keep you rolling at
19 – 21 mph. At the end of the day, it was 8:43 of pedal time, 17.1
avg. to the Border and 96oz of fluid. My record this time is in how
little fluid I had, what a bonehead. 11.3 oz of fluid per hour over
the course of 8+ hours. Ok, that hurt.

On Sunday I had a very nice 14.7 mile ride to retrieve the truck from
Willington. I wanted to keep going. — Garth Bean 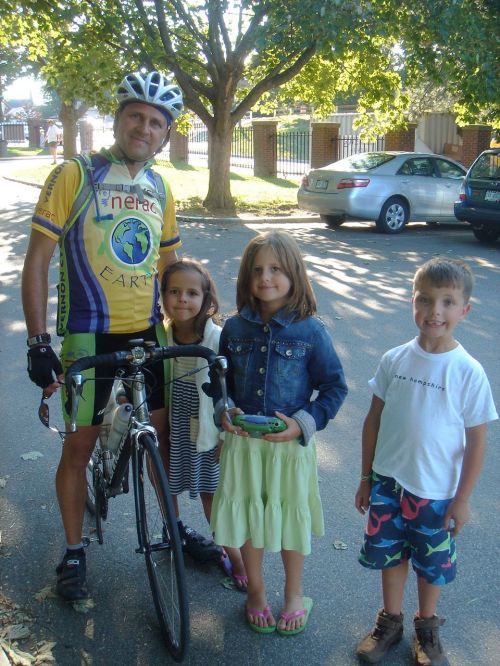 I got up this morning, looking forward to the group pre-ride of the Ashford Metric Century with the club. A number of us volunteer to be support on the day of the event, so this is our chance to ride it.  I knew that Jill, Sue, John Stockford, Mark S., Rick and Jerry were planning on riding it, plus whoever else showed up.  It was going to be nice to have a larger group and perfect riding weather.  I was drinking my coffee, chilling, happy that I remembered to pack a camera, so I could take some pictures for the web site and waiting to leave the house at 7:30 to get to the ride at 8:00.  As I headed out the door, I realized that the start time was 7:30 not 8:00!

Yikes… quick panic call to Jill to tell her that I was going to be late and not to wait for me. Dropped the phone on the floor, picked it up…put the battery cover back on…geez.  Jill said that not everyone was ready to start yet and asked where I was.  Unfortunately, I was still at home in my driveway in Coventry and it is a good 25 minute drive to the start in Ashford.  Jill kindly offered to have to group ride slower, so that I would have a chance to regroup quicker.  I told her that I was game for a chase, so please don’t slow the ride up and I will do my best to catch up with the group.  I really, really, really didn’t want to be “that guy” that is late for the ride and makes the group slow down for him.  I will take my punishment willingly while riding to catch up.  I have been time trialing quite a bit this year, so I know how to meter out my efforts to keep a fast solo pace without bonking. I wasn’t worried about getting lost, since Garth and I mark the route every year and I am really familiar with it, so no issues there!  About  25 minutes later, I got to the parking lot, grabbed the bike off my car, made sure that I had everything I needed, quickly looked at the cars in the lot to see who was riding….cool, Steve made it and started the chase.   As I was riding, I was trying to calculate when I thought I would catch the group…hmmmm my average speed… 30 minute head start….guess their average speed… alrighty then!  I figured realistically, that around Brooklyn or Canterbury I should be rejoining them, but of course deep down inside I was trying to catch them somewhere in Pomfret.

Well…I got to Pomfret, no group to catch yet, past the schools…flew down the hill at 48 mph, then climbed into Brooklyn.  I went past the fairgrounds at a good clip and noticed all the RVs there… wondering what was going on today?  Next, off to Canterbury, back into Brooklyn and into Canterbury once more…  What gives???? I haven’t caught them yet? Where are they?  I was trying to be good with my hydration… making sure that I kept hitting the ol’ water bottle…especially since I didn’t drink until about 15 miles in… really didn’t want to cramp.

It is funny how the mind plays tricks on you when you are riding at a hard pace.   I started wondering if Jill said that they would wait for me at the Vanilla Bean Café and I forgot, well, it’s too late for me to wait if they are behind me…and if they are ahead of me… they all felt really good and strong, worked together, since they knew I was chasing and it was going to take me quite a bit longer to catch them…ouch… or what I hope didn’t happen…they took a wrong turn and they are really behind me and not up ahead?

Through Scotland, North Windham, Mansfield and the Hollow…. Still no one and only around 10 miles left.. I’ll never catch them now…. Secretly hoping that they started taking it easy now that they are almost back and since I never caught them… that thought helped me keep the speed up..   I think I saw a couple of riders wave to me from the other side of the road… not sure… brain fog… On to Route 89… keep peeking up ahead on the road… no one…   Five miles left.. two riders coming towards me…a Nerac jersey… was there a mechanical? Why are they going the wrong way?  Oh, it’s Tom and Jen Schirmer… I wave to them, circle around, they see me giving chase and they slow up, we chatted a bit and I ask them if they saw a Nerac group on 89.  They said they didn’t… strange indeed!  I started thinking that somehow I did get ahead of them.  I wheeled my bike around and continued my dash to the finish… hoping that I would see everyone in the parking lot…teasing me, because I couldn’t catch them.  I railed into the parking lot and all the cars were there and no riders.   I was now worried that something happened to the group.  I grabbed the cell (didn’t want to use it before now…didn’t want to know how far ahead of me they may have been) and called Jill to make sure that they were ok.  Thankfully she answered and they were fine… it seems that I must have passed them at the Brooklyn Fairgrounds…while they were getting water… If I wasn’t looking at all the RVs, I might have noticed them or maybe I did see them and I took advantage of the situation ;-).  Checked my computer… 19.2 mph avg… 3 hours 22 minutes… what a chase.  Loaded up the bike…changed shoes and headed home via Route 89, the long way, so that I could say hello to them on their way in. –John