When: Saturday, August 25th
Who: Mike and Jill Nugent

Cliff got his picture snapped at the 16th Annual Steeple Chase for an article on the event.  It can be found in the Windham-Mansfield edition of the Reminder News August 24, 2007. 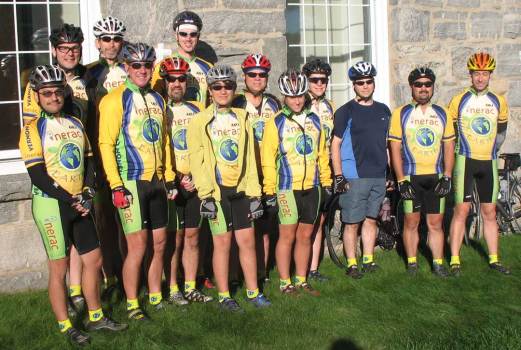 Got up this morning after listening to the heavy rain in the early morning hours. The storm had passed and almost all evidence of the rain was gone… Checked the weather… low 60’s for the start and 15 mph winds… Get out the cool weather gear…headed to Willimantic a little early with my son… wanted make sure that all the Nerac Earth riders were registered. All was good as usual. We had 13 riders signed up this year, six for the century and seven for the 50 miler. We gathered for a group photo (thanks Karen!) before the start. Great time, cool event!

Cliff sent me a link to some pictures and a story of a ride he joined at Case Mountain (one of my favorite places to ride…surprised?!?) that was posted on the MTBR forums. Last Ride at a Local Favorite.. 10 pictures worth showing.

Super hot and humid but still 6 brave souls showed up. Ed and Philip decided on a mild route due to the weather and we headed toward Stafford. Some good hills for the warm-up then a nice and steady, rolling route out to Monson. The way back had some great descents that made you forget how hot it was and then a nice paceline on 32 back to the parking lot got us back safely at 31 miles. Had a couple brief moments of stardom with some sprinting but of course paid for every moment of it. Those boys are strong and the phrase “you play, you pay” comes to mind. I always forget how great this ride is and how wonderful Ed and Philip are. They always provide a fun and safe ride with entertaining stories. – Jill

Last Wednesday we did the perfect loop at Grayville so this week we decided to return to do it again. Same great loop, a little more humid and muggy, but a little more drama this week. Andy had his hardtail and the seat kept tipping, my seat rail snapped off about half way through the ride, and Jim got a flat on his rear tire and despite some valiant attempts from the crew that wheel just would not come off so Jim had to hoof it out. Luckily we were almost done at that point. Minus the difficulties it was a pretty speedy ride and I want to go back and do the same loop a few more times, that long climb in the beginning is a great warm up for the rest of the ride. Awesome loop Glenn! – Jill